Back in the heyday of 35mm film photography, a ‘kit lens’ or standard lens usually meant a 50mm prime featuring a maximum aperture of f1.7…f2 – most typically, f1.8. 50mm lenses were popular with manufacturers because they were easy to get right in the optical department and cost little to manufacture. They were also popular with photographers because they were both sharp and inexpensive at the same time, and their angle of view was reasonably close to that of a theoretical ‘normal lens’ for the 135 format (a ‘real’ normal lens would have had the same focal length as the diagonal of a full frame on 35mm film, i.e. 43mm, but such lenses were rarely made, especially for interchangeable-lens system cameras).

With the growing popularity of zooms, the term ‘kit lens’ came to mean a typically 35-70mm or 28-80mm f/3.5-5.6 standard zoom rather than a 50mm ‘nifty-fifty’; and this continued into the digital age as well, except that the focal length range was adjusted to take into account the generally smaller sensors of most DSLRs. While that appeared to make sense, demand for a fast, compact and optically sound ‘standard prime’ grew steadily among the increasing number of DSLR owners. Nikon heard the cries of these photographers, and in the run-up to PMA 2009, announced the AF-S DX Nikkor 35mm f1.8G lens, for use on their DX cameras. 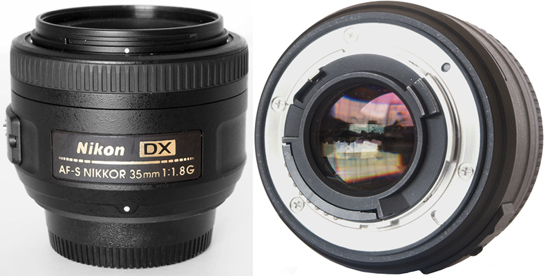 The Nikon 35mm f1.8G is indeed a very compact and lightweight lens, measuring only 70×52.5mm  and weighing in at just 200 grams. Part of the reason why it is so light is that the outer barrel is made of plastic (and feels so), but at least the lens mount is metal. The Nikon 35mm f1.8G will mount on any Nikon SLR, but – as noted in the Introduction – it is meant to be used on digital SLRs with a DX sized sensor only. Use of this lens on a film body would result in huge amounts of vignetting with completely black corners. Attaching it to a DSLR with an FX sized sensor will cause the camera to switch to DX mode and shoot at reduced resolution by default. With ‘Auto DX crop’ disabled and ‘FX format’ selected, the Nikon D3, D3x and D700 will show the same kind of vignetting as the film bodies.

Mounted on a DX format DSLR and focused at infinity, the lens has a diagonal angle-of-view of 44 degrees, which is slightly less than the approximately 46-47 degrees of a 50mm lens on an FX body. 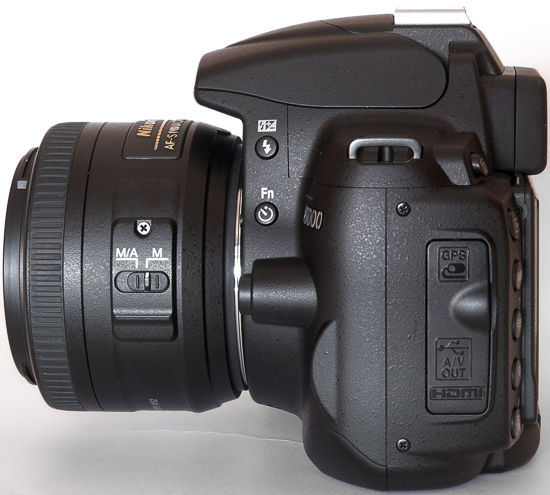 The Nikon 35mm f1.8G offers little in the way of features. Being a G lens means it has no aperture ring – though that is not a real problem, since all of Nikon’s Digital SLRs allow the photographer to set the desired aperture on the camera, which then communicates this information to the lens. A more important omission is that of a distance scale, along with any depth-of-field markings. This is a bit of a sad news for street photographers, who will not be able to use zone focusing techniques as easily as with a lens featuring a proper distance scale complete with DOF signs. The lens also lacks the Vibration Reduction feature that is increasingly common on Nikon’s lenses – though to be fair, none of their short primes has VR. The only outside control you can see on the lens barrel – putting aside the mechanically coupled focus ring – is the focus mode switch that you can see below.. 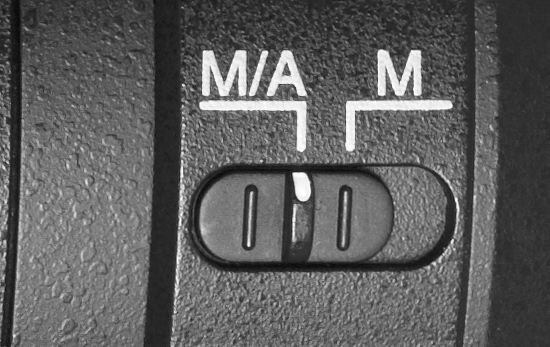 In most markets, the HB-46 hood is included as a standard accessory with this lens, but it was not provided to us for this test.

The Nikon 35mm f1.8G features a Silent Wave Motor (SWM) that allows near-silent auto-focusing on all Nikon DSLRs, including those that lack an in-body focus motor (D40, D40x, D60 and D5000). Importantly, this solution allows instant manual override even when the focus mode switch is in the M/A position.

In use, we found the focusing to be indeed very-very quiet, and generally fast too, with the lens mounted to a Nikon D5000 body. Live View auto-focusing was a different story – the 35mm f1.8G is obviously not optimised for contrast-detect auto-focus, and focus times in Live view were not perceptibly better than with the 18-55mm VR lens that is often sold in a kit with the D5000.

This entry was posted in Photography and tagged Session, Vintage.